Our Village Hall began life in early 1914 as an Estate Hall, built by Percy Selwyn Newbound, the developer of the Parkfield Estate, for its workers. At that time the village was very different, with about 650 residents instead of today’s 3,900 or so. 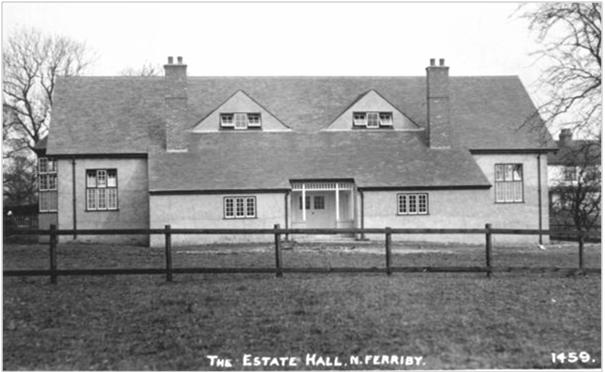 Percy Newbound bought the plot of land on which the Hall stands in February 1914. He was described in various legal documents as a Gentleman or a Builder, but the label which best fits him today is that of a property developer, as he came to build and own a large number of properties in the village and elsewhere in Hull, and he developed the bulk of the Parkfield Estate. Selwyn Avenue is named after him. Upon completion of the main part of the Hall (seen from the rear in the postcard above), it was immediately requisitioned by the Army for the duration of the First World War as a canteen and recreation hall for the King’s Own Yorkshire Light Infantry troops, whom we know from a resident’s diary were billeted in North Ferriby. 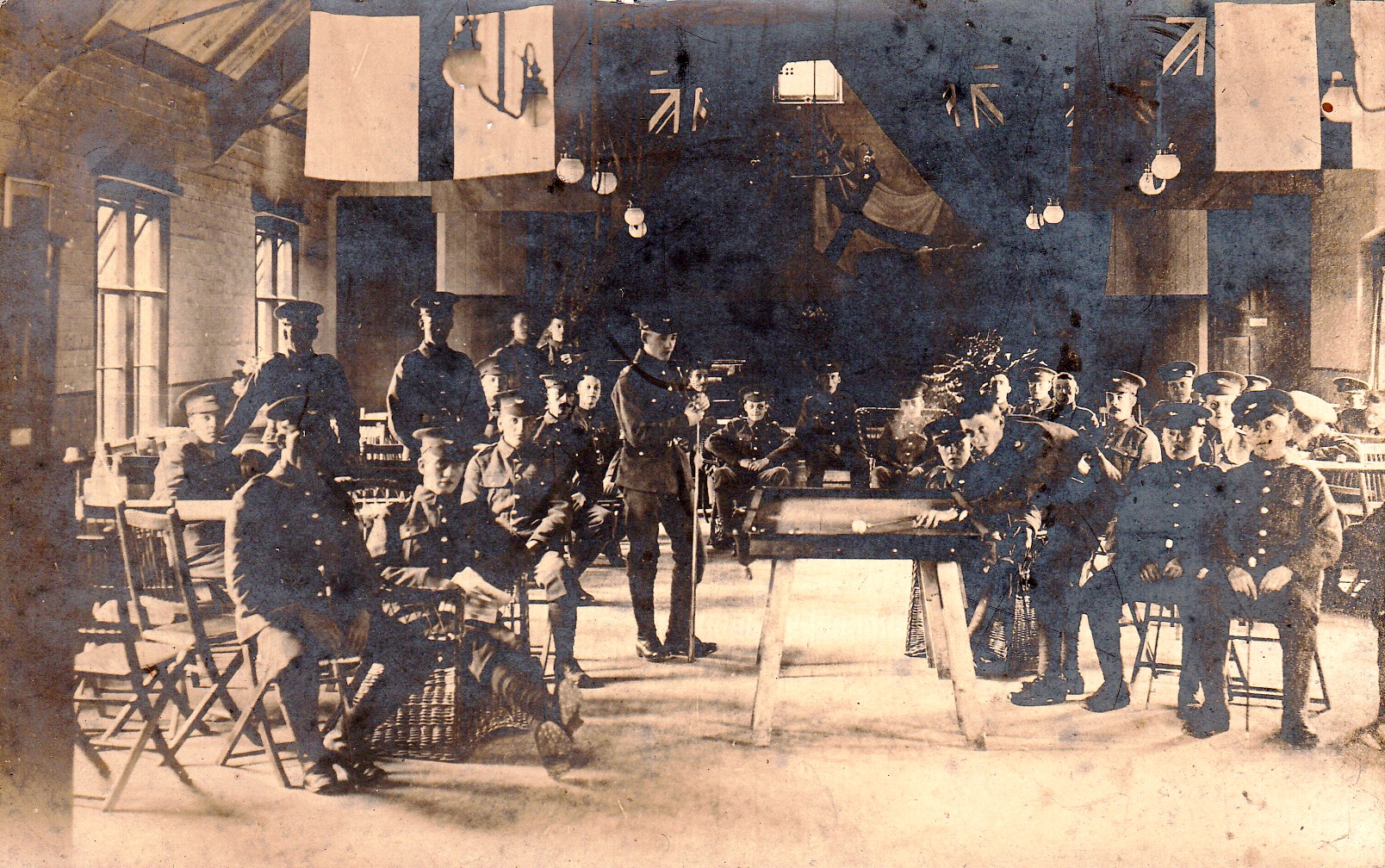 Little is known for sure about the use of the Hall in the period after World War One, other than a complex series of financial deals and mortgages over this and other land to help Mr. Newbound finance his projects, and details of a few events that took place in it, but it is fairly clear that the Hall was used for community purposes almost from day one.

At some stage between the wars the Hall was extended by the construction of a new wing to the rear, as shown in the floor plan below, dating from the 1930s. 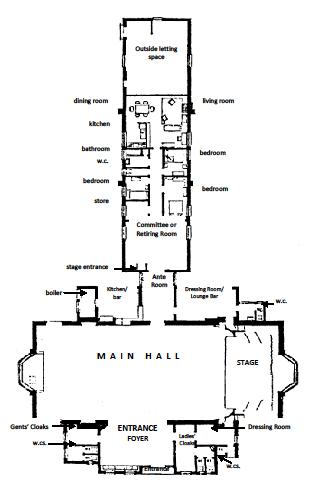 This contained a three-bedroomed flat for the use of the caretaker, a small committee or retiring room and, at the back, a small room marked as “outside letting space”. This wing is the section that now contains the Priory Rooms, Dance Studio and doctors’ surgery.

The North Ferriby Parish Council minutes for 18th July 1939 show that enquiries had been made with regard to possible grants towards the cost of buying or building a village hall. However, a couple of months later saw the outbreak of World War II and, although residents recall the Hall being used for recreational purposes, we know that it was soon requisitioned by the military; by the end of the war it was in a very dilapidated condition. Soon afterwards a negotiating committee was formed by the Parish Council with the intention of acquiring the Estate Hall as a social centre for the village.

Meanwhile, an opening ceremony had been held on 4th November 1949, although ‘only half the [renovation] scheme had been accomplished up to date’. The programme stated ‘the Hall belongs to the village and is to be run by the village for the benefit of the village. It is hoped that ….. [it] will not only fill the present need but will add to and enrich our village life in the future’.

The Trust Deed, confirmed on 24th March 1953, vested ‘the general management and control of the Trust premises and the arrangements for their use’ in a Committee of Management, with specified duties and powers as Charity Trustees. However, the Hall was not finally conveyed from North Ferriby Village Hall Limited to the Parish Council until 6th July 1962. Had this been overlooked?

As a result of the building of housing in New Walk, on the northern boundary of the Hall’s land, access to the northern exterior of the Hall became difficult. It was therefore agreed in 1974 to transfer a strip of land along the north side of the Hall to the owners of the four bungalows involved, in return for their protecting the damp proof course and air bricks of the Hall wall, and allowing the Trustees or their workmen access for purposes of alteration, repair and maintenance.

Following the Parish Council’s acquisition of the Hall, the initial management committee comprised representatives of the Parish Council, the Parochial Church Council, North Ferriby Methodist Church, Women’s Institute, British Legion, Boy Scouts, Toc. H., North Ferriby United A.F.C., Drama Group and the Playing Fields Association. Only Toc. H, an international charity, is no longer active in the village although a few of the others are no longer involved with the Hall. 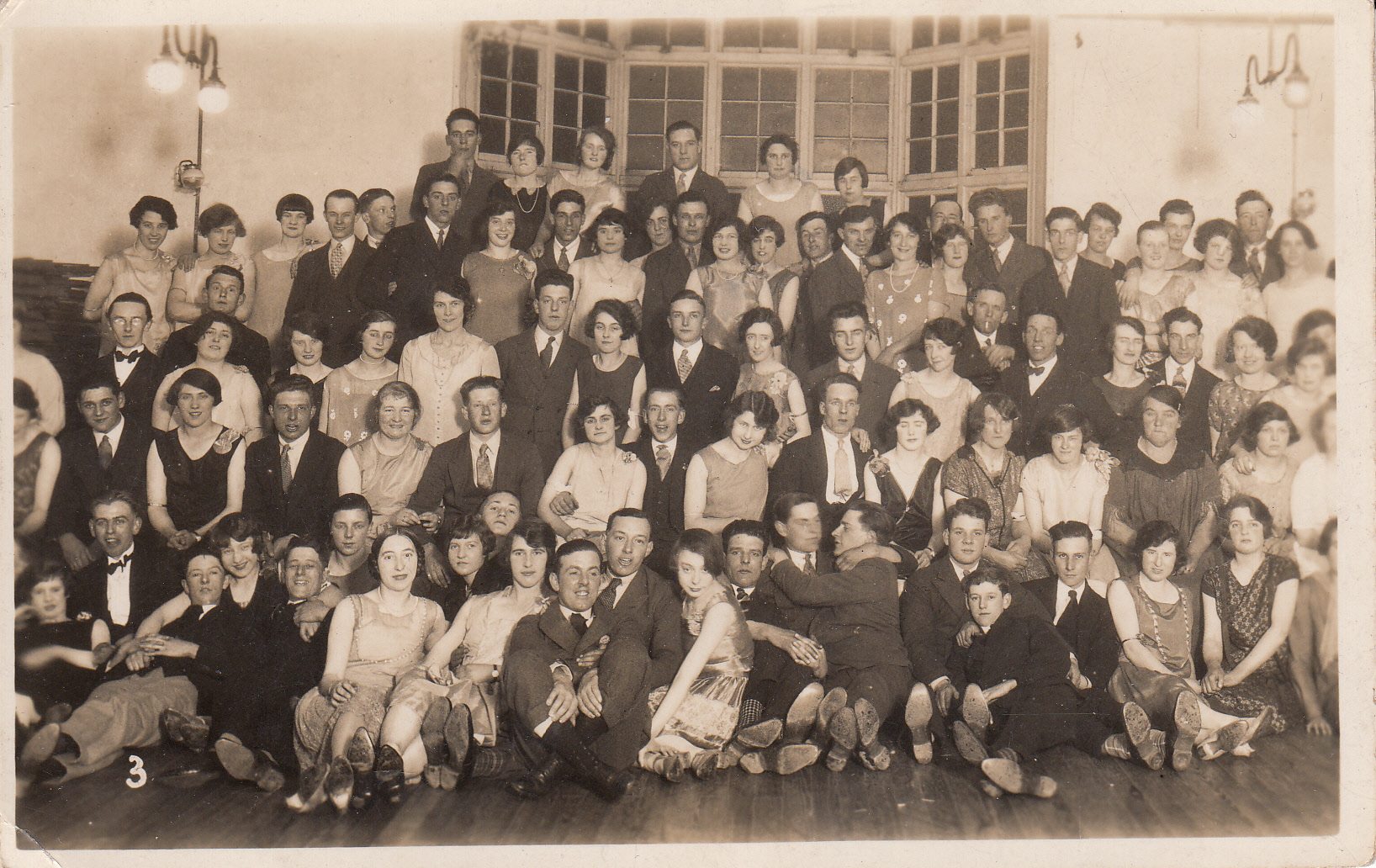 A resident has told us that the Hall has always been used for community events by almost every village club – the drama group, the football club, the cricket club, the Darby and Joan Club, Guides and Brownies, Cubs and Scouts; at times a hairdresser and also a barber operated there, it has accommodated a small private school and, for many years, the baby clinic. She tells us that there was a dance every Saturday night, well attended as can be seen from her 1930s photograph above. On 12th May 1937 the Hall was one of the focal points of the celebration of the Coronation of King George VI. After the daytime programme, the Estate Hall hosted a Whist Drive at 8.00 p.m., followed by a Dance at 10.00 p.m. We don’t know who played for the Dance, but it is recorded that the ldeal Boilers and Radiators Works Band played for the fancy dress parade and sports during the afternoon. During WWII the WRVS operated from the Estate Hall issuing identity cards, ration books, rose hip syrup, orange juice etc. and, during the early years of the war, the Ferriby Anti-Gloom Society (FAGS) met each Saturday evening for community singing, conjurors and the like.

Over the years, the Hall has undergone a number of renovations. At some date the bay windows at the end of the Hall were bricked up. Recent changes have been the construction of a flat-roofed storeroom at the front, to the left of the entrance, in the early 1990s, and the conversion of the room at the rear of the Priory Rooms wing (the “outside letting space” referred to earlier) from a charity shop operated by the R.N.L.I. for many years up to 2009 to a doctor’s surgery which opened in 2010. And in 2014 the antiquated main toilets were replaced by smart new energy-saving modern ones. 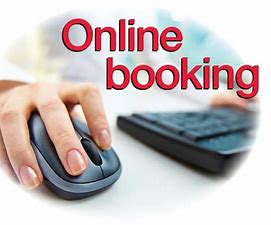 The Village Hall has now commissioned a fully automated online booking system. This will make it easier for our customers to reserve and pay for tickets. It will also help us to streamline our administration systems, manage our bar and kitchen stocks and develop seating plans to suit your preferences. We encourage you to try out our new online booking system.

For Ferriby Live events you will be asked to pay for the tickets at the time of booking. Please have a credit or debit card ready.

For Ferriby Screen Showings tickets will be reserved but you will pay on the night, at the door, in cash. 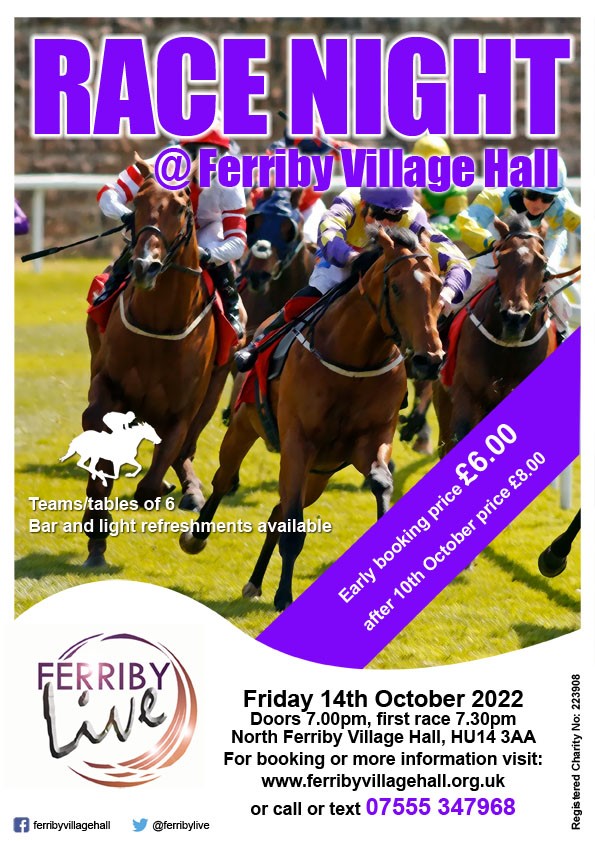